Born in 1894 to a well-to-do family in Łódź, Poland, Szyk grew up with a love of the arts and his Polish-Jewish heritage. 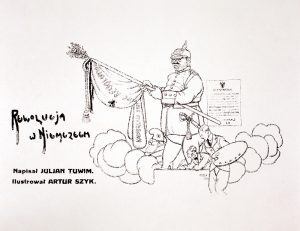 In 1910, the young prodigy studied at the prestigious Académie Julian, a progressive art school in Paris. The city pulsed with visual ideas—such as Orientalism and decorative folk art—that undoubtedly inspired his work. Szyk returned to Poland in 1913. He worked as an editorial cartoonist and as a costume and set designer while informally attending the Krakow Academy of the Arts.

Szyk soon traveled to Palestine and the Middle East to gather material for an art exhibit on modern Jewish pioneers, an experience that shaped his lifelong commitment to Zionism. His trip was cut short by the onset of World War I: the Russian army conscripted Szyk to serve as a lieutenant in one of its guerilla divisions. A few years later, the Polish Army in Łódź recruited the artist to be director of the Department of Propaganda during the Polish-Soviet war.

Szyk continued to create art on his own time and, in 1919, he published his first book of caricatures, Rewolucja w. Niemczech [Revolution in Germany], a satire of post-WWI Germany.