In the 1930s, the Polish-Jewish artist Arthur Szyk joined a storied artistic tradition by illustrating an exquisite set of playing cards. By then he was established in the art world as a modern master of the medieval art of illumination, as well as a book illustrator par excellence, and so had the opportunity to pursue his own projects. 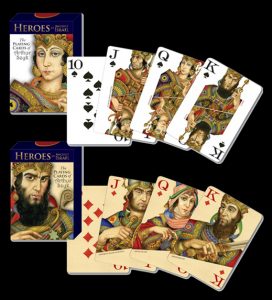 Though the playing cards were not published in Szyk’s lifetime, it is clear he intended the illustrations for reproduction.

Every idealized portrait includes the hero’s name in Hebrew calligraphy and a symbolic element alluding to his or her story. Not only is each portrait a visual feast of color and pattern but also a succinct visual argument for the “New Jew” as a fearless man or woman of action, whether in Israel or in the Diaspora. The artist’s carefully considered choices for the Kings, Queens and Jacks display not only his knowledge of and passion for Jewish history but also his personal vision of Jewish heroism, a heroism that sanctifies the sword and depends on human achievement rather than divine intervention.