The Haggadah (Hebrew for “the telling”), the great book of freedom, tells the story of the exodus of the ancient Hebrews from slavery in Egypt. One of Judaism’s most popular works of religious literature, it has been used during the Seder meal of the holiday of Passover—that is, Pesach—for more than one thousand years. 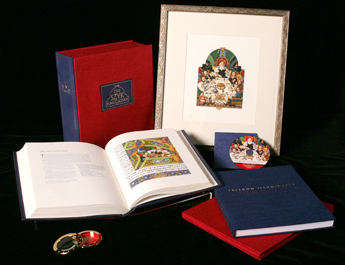 Jewish artists first began illustrating the Haggadah during the Middle Ages (the Sarajevo Haggadah of the 14th century is a well-known example), a vibrant tradition still observed today.

Without question, one of the most beautiful and moving of all illustrated Haggadot is the beloved Haggadah of Arthur Szyk (1894-1951). Drawn and first published during the rise of Hitler, The Szyk Haggadah is a triumphant and enduring work of hope and courage, the supreme expression of one artist’s love for his people and his heritage.

A Polish Jew keenly aware of current events, Szyk fused his two passions—art and history—into a visual commentary on the dangerous parallel between the Passover narrative of oppression in ancient Egypt and the alarming developments unfolding in Nazi Germany in the 1930s. The artist adopted illuminated miniature painting—an antique and nearly forgotten technique—to comment on the politics of his day. The end result is so spectacular that the words of an early reviewer still ring true: “The Szyk Haggadah is worthy to be placed among the most beautiful of books that the hand of man has produced.”

“As a dealer with 42 years of experience in handling the finest illustrated books of all kinds, I can state without hesitation that the new edition of The Szyk Haggadah published by Historicana far outclasses the original in every way and is in and of itself a masterpiece of design and production, flawlessly produced in every detail. I have no doubt that it is and will remain one of the masterpieces of book production of the 21st century.”

Though the first edition of The Szyk Haggadah was an undisputed success, printing technology in 1940 was not able to capture the full brilliance and detail of Szyk’s original watercolor and gouache paintings. Most people today know Szyk’s masterpiece only through inexpensive reproductions, and though they appreciate the beauty of his iconic work, they do not fully understand the meaning or history behind the intricate images.

Thanks to the generosity of a private collector, who owns the entire set of Haggadah originals (all preserved in fine condition), and Arthur Szyk’s daughter, Alexandra Szyk Bracie, Historicana has produced an entirely new edition of The Szyk Haggadah, complete with a new translation and commentary and an illuminating companion volume. The work of an international team of craftsmen and scholars, the new edition employs every technological advance in bookmaking and image reproduction to bring Szyk’s timeless vision into the 21st century.

Next: See a gallery of images from The Szyk Haggadah.